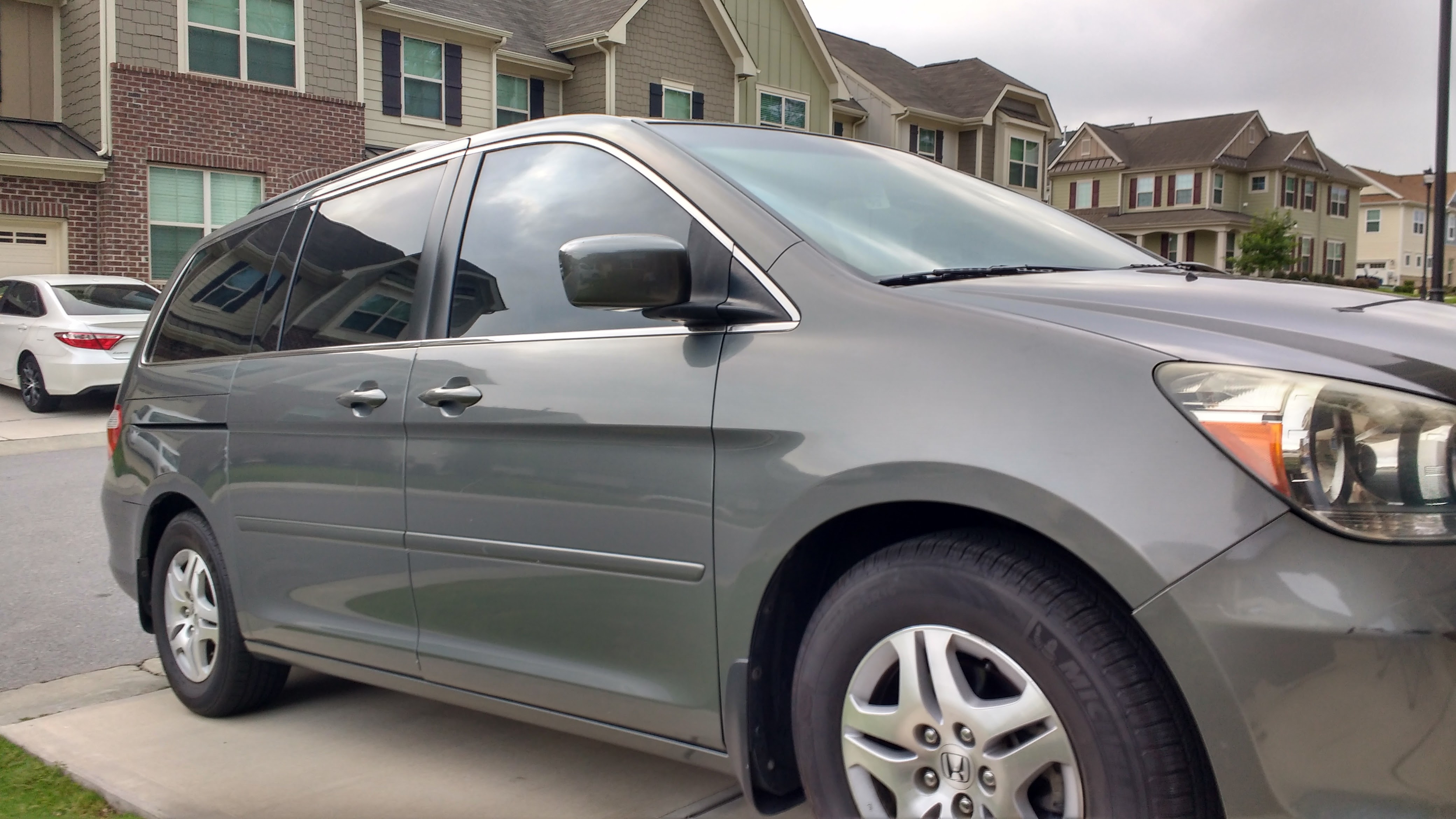 Few weeks ago (October 19th), I drove to the Raleigh police towing lot to gather my personal belongings out of our Honda Odyssey minivan which was stolen then found a day after I had sent my title to the insurance company. The car no longer belonged to me, only the paraphernalia in them. As I took out the Ritz crackers from the glove compartment, the Alphabet book from the backseat sleeve, and a hand sanitizer rolling around under the passenger seat, I wished I had waited a day more before I claimed the comprehensive coverage,than the minivan would still be mine, even if it was vandalized with cigar ashes smeared on the dashboard.

This minivan has a unique VIN number, like every other car. But this minivan also had a name. The name was a common one, but had a personal connection to our family, much like our first names. My son’s name is Ian. There are two other Ians in his grade. But the memories and affections conjured when I sound the name is unique to our experiences as father and son. We didn’t care to be creative with the naming of our minivan. We didn’t even christen it at first. It only came after years of faithful service. We had grown fond of our minivan, formed an attachment, so it was only natural for us to acknowledge that relationship by naming it.

Our minivan helped me raise my three kids, hauling them safely with all the luggage that goes with lugging around three kids: diaper bags, strollers, and car seats. Our minivan turned our move to North Carolina from Arizona into a two week road trip, 3,425 miles  — as we dipped South and crossed New Mexico, Texas, Louisiana, Mississippi, Alabama, and Georgia. He took seven passengers, my in-laws joined us, for this long trek. The ride in the spacious cabin and versatile seating was often more comfortable than hotel rooms where our budget crammed seven into a single room, the three kids sleeping on the floor between two twin beds, and myself sometimes squeezed between them. That road trip would turn out to be the last one for my father-in-law who passed away from lung cancer the year after. My mother-in-law says to me every time she visits, “Sam moksa (Pastor Sam), I am glad we did the cross-country that year, that he got to see this land where his children have made home.” Many of the pictures we see on his memorial day are pictures from that cross country. The most vivid one is him strutting through the white sand in New Mexico with his his white silk shirt and pants, and his ivory cowboy hat brim flapping. It captures his personality: fastidious, disciplined and cocksure, a Korean John Wayne. 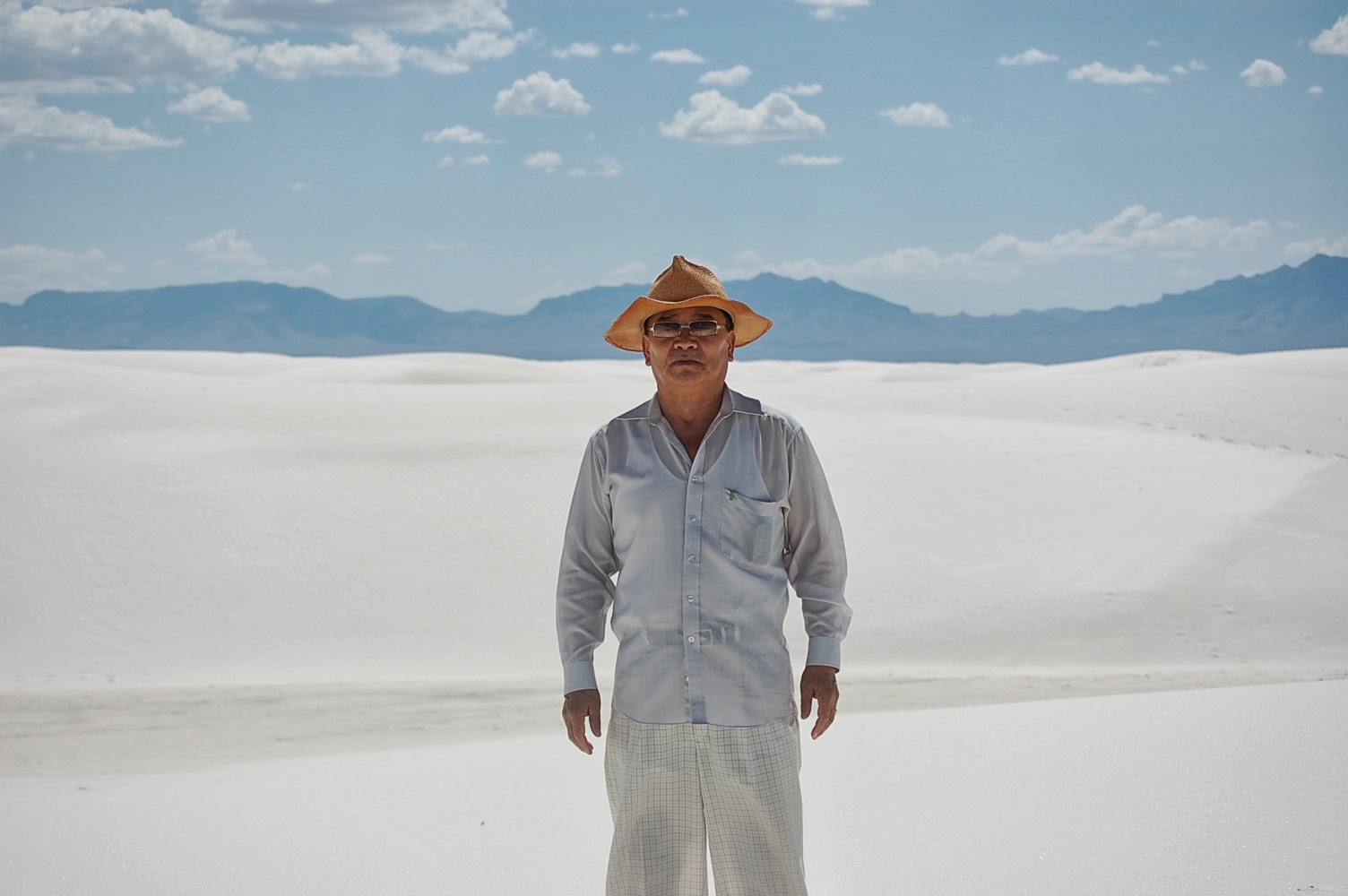 Our minivan helped feed our family, making runs into markets and returning with half-a-dozen plastic bags stuffed with food at least twice a week. Our minivan faithfully carried us for 144,250 miles, for 10 years, through egg-scrambling Arizona summers and ices in Raleigh winters. It took us to the Blue Ridge mountains to see the hills carpeted in orange and red quilt, and to the beaches where the green-blue Atlantic teased us. I can’t recall the day, but it was as the kids were getting into our minivan to be transported to school that my girl Elina, then 7 years old, said, “We should name him.” We threw around names while heading to school and unanimously agreed on the name plastered on the rear door, Odyssey. After that, my children greeted him in the morning as if he was a big, muscular, and indefatigable dark grey husky, “Good morning Odyssey. Good boy!”

Most car thieves are not professionals. With the Vin number marking the car it is impossible to sell. Professionals steal cars to harvest its organs. Engines fetch a hefty cash. The most common car thieves are teeangers who want to prove their street cred. Sargent Henry, who met me at the lot and called the CSI for fingerprinting, gave narrative for our loss. “Teens will steal a car for a joyride for a night or two. This was abandoned in a parking lot, sat there for two weeks until somebody finally called.”

Both the passenger and driver seats were pulled down to supine position; Ashes and cigar mouth pieces filled the cup holder. For them it was a night of excitement, feeling big for breaking law, for challenging authority and winning. For us it was loss of weeks on papers, thousands of dollars on rekeying and obtaining another car, and a sense of security. More terribly, it was an invasion. For them, it wasn’t personal because they didn’t know us, nevertheless it was a personal attack. They had kidnapped our huskey. I am hoping that if those teens knew the personal cost, they would not have done it.

Once I had removed all of our belongings, our minivan looked empty. Take out the mileages and the scratches and this was how it looked when we first discovered it in the dealer’s lot among many other colors and trims of Odyssey. It didn’t look empty then, but on the towing lot, it does, cavernously empty because in 10 years it had filled with babies, children, adults, travels, fights, makeups and apply make ups, naps, luggages, woods, cups, drinks, foods, and memories. I closed the door and said my farewell, the towing lot feeling like a pet cemetery. “Goodbye Odyssey.” I kept my lacrimal duct in check.