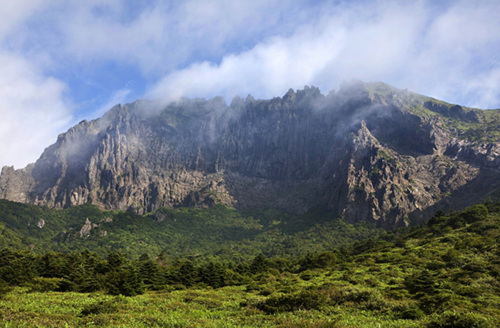 The shoe boxes are stacked, ordered in ascending size,
separated into sexes, what a customer chooses to wear, cross-
shoeing — her own compound word — is not her judgment,
just that the men’s sneakers don’t sneak in between
Dora sandals, ankle-strap heels and stilettos.

Then off to the vegetables which are biologically,
thus categorically, distinct from the fruits which are ovaries,
–which is probably why people want to stay in the dark
about this simple distinction about the foods they eat,
this expose on the violence necessary for life —
she makes sure vegetables and fruits keep to their sections
with one exception, tomatoes, which are fruits,
but they swear they are vegetables, and she
won’t fight them, besides, what harm is there
if a tomato lies next to a bok choy, as long
as a tomato believes itself to be a vegetable
and a bok choy doesn’t mind.

Finally, she checks, the polish of the floor,
which, if done with diligent love,
you can see the whirling of the ceiling fans,
swirling like Van Gogh’s broad stroke paintings.

She is not the manager, but she feels responsible,
because this rectangular universe is small enough
for her to feel responsible, a feeling she enjoys.

The cash register’s numbers are lit neon green, to traffic people,
and the express lane’s maximum of 20 is also lit,
perhaps today, no one will break it, though there hasn’t been a day
that rule wasn’t broken in the 29 years she has opened the market,
the only days missed were when her father died, then her mother the year after.

Although, sometimes, she misses the wilderness of her childhood years,
wandering under and around Hallasan, especially when she sees the
first customers come in holding hot coffee with steam rising
like mists on a sea when the sun wakes the wild.