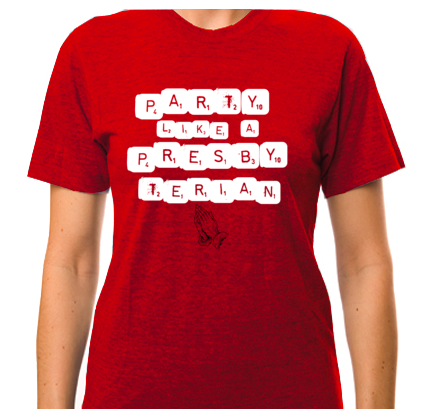 No more jokes on Presbyterianism! I call for an emergency moratorium!

I recently returned from a PCUSA (Presbyterian Church of USA) conference and I’m going to thrust my middle finger into an outlet if I hear another joke on the denomination. Not that I’m a denominational patriot but because the jokes are void of creativity. Their’s no punch in them, no insights into the contradictions of reality which is what good jokes do, forcing a confrontation with discrepancies through exaggerations.
Presbyterian jokes are the same rehashed on: how Presbyterians are the “frozen chosen,” that our first action is to form a “committee,” and our second action is to form a “sub-committee,” ad nauseum. Every workshop I attended, someone cracked those same tired jokes, and the whole room always broke out laughing as if someone played a laughter-track on cue. What’s more unfunny about those jokes than being unfunny is that those jokes cover up the real dangers in our denomination. We are choking on our laughs.
For one thing, we think joking is a way of being above the issues. If I can joke about the sub-sub-committees, then surely I’m not contributing to the problem. I give myself coverage with laughter. I laugh hard enough, then the joke is not on me. But if everyone’s laughing and no one is getting angry, then the problems entrenched in our denomination is nobody’s fault, and no one’s taking responsibility.

Laughter, of course, is good for you. It’s healthy to be self-critical. One should laugh at oneself, or he will die under the weight of his own seriousness. If you are serious all the time, then what can you be serious about?
A healthy couple can humor themselves and laugh about their foibles because the foundation of their trust is strong. A joke is not going to endanger that relationship. From the confidence of their relationship, they can air their contradictions.
Then there are couples who only make fun of each other. It’s one of those uncomfortable jokes where the one who made the joke is guffawing, and the spouse who is on the receiving end gives a perfunctory chuckle to pretend he or she is above it, and the rest of us, who happens to be there, laugh uncomfortably hoping that this doesn’t break out into an argument in front of us. Presbyterian jokes is on the cusp of breaking into a fight.
So let’s stop with the jokes for a while, especially as we have been using it to shirk our responsibility. Maybe we need to shed some tears which usually attend genuine repentance.
There’ s a time to laugh and a time to mourn.
There’re times when one must be serious because only when one is serious can one eventually laugh from his belly. Then maybe, we can get some new creative jokes on Presbyterianism.
Who knows? Maybe a joke about how one can slow down Presbyterian church plants?